4. ​Anders Nilsson, Sabres defeat Panthers
Buffalo goalie makes 33 saves for first shutout in more than four years
by Joe Yerdon / NHL.com Correspondent
​BUFFALO -- Anders Nilsson made 33 saves to help the Buffalo Sabres to a 3-0 win against the Florida Panthers at KeyBank Center on Saturday.
Nilsson's second career shutout came in his third consecutive start. His previous shutout came on March 4, 2012, when he made 24 saves for the New York Islanders in a 1-0 win against the New Jersey Devils.
Panthers forward Vincent Trocheck had a chance to break the shutout when he was awarded a penalty shot with 57 seconds remaining after he was hooked on a breakaway, but shot his attempt over the net.
"Never seen a [shutout] like that," Sabres coach Dan Bylsma said. "Trocheck gets the breakaway… with a minute left and then the penalty shot. [Nilsson] was going to earn the shutout with a stop. I don't know if he got a piece of the penalty shot or he just missed, but he earned it with that one."
The Sabres (2-3-2) ended a four-game losing streak. The Panthers (3-4-1) have lost three straight.
"I think the most important thing is the two points we got tonight," Nilsson said. "That's huge for us and it means a lot for our confidence and that's something to build on and hopefully we can continue to play the way we did tonight."
Johan Larsson gave the Sabres a 1-0 lead 7:47 into the first period with his first goal of the season. Larsson received a pass from Brian Gionta and took a wrist shot from the right faceoff circle that beat Panthers goalie Roberto Luongo over his left shoulder.
"I think [Gionta] won a battle and I just stayed and tried to get a spot and he just made a great pass and I was just trying to hit the net and it went in; it was a great feeling," Larsson said.
Kyle Okposo gave the Sabres a 2-0 lead with a power-play goal 5:57 into the second period. Okposo put a rebound of a Rasmus Ristolainen shot that was tipped by Sam Reinhart and went off the crossbar past Luongo for his second goal of the season and first at home as a member of the Sabres.
Reinhart gave the Sabres a 3-0 lead with a power-play goal 8:48 into the third period. After Jaromir Jagr took a hooking penalty, Reinhart sent a pass from behind the net that Panthers defenseman Mark Pysyk inadvertently kicked through Luongo's five-hole for his first of the season.
"I think if it goes by, [Okposo]'s wide open," Reinhart said. "I think I've had chances this year. I think the way the year has been going, that's the way the first one had to go in, because the chances have been there.
Pysyk and Sabres defenseman Dmitry Kulikov each played against their former team for the first time since they were traded for one another June 25 at the 2016 NHL Draft.
"It's the first game I'm really disappointed," Panthers coach Gerard Gallant said. "I thought we played well all season long. Tonight we didn't play well enough; we weren't even close to winning that hockey game. So it was disappointing."

Goal of the game - Larsson's goal was the game-winner and the quick wrist shot appeared to surprise Luongo.

​Save of the game - With 10:50 to play in the second period and the Sabres ahead 2-0, Panthers forward Jonathan Marchessault took a slap shot from inside the blue line that Nilsson stopped with his left leg. Nilsson laid on his back to made sure the puck didn't get away.


Highlight of the game - With 45 seconds left in the second period, Kulikov took out Panthers captain Derek MacKenzie with a well-timed, hip check when MacKenzie skated toward the Buffalo net, nullifying a potential scoring chance.
​ 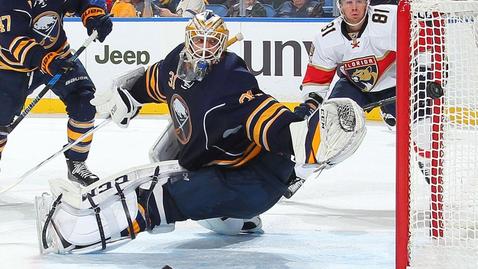 Unsung moment of the game - Nilsson and the Sabres penalty killers came up big after Gionta took a delay of game penalty with 5:16 remaining. Nilsson made saves against Jared McCann and Keith Yandle and held the Panthers to four total shot attempts. Florida went 0-for-4 on the power play.

​​They said it"Yeah, you know, everyone was, 'Really?' and we were really mad when [Trocheck] had the penalty shot. [Nilsson] was really patient so it was nice to see. He's always working hard in practice so it was really nice to see him get the win." - Sabres forward Johan Larsson
"To end a road trip, you've got to salvage from points here. We got to be ready against a good team in Detroit. We just got to get back and focus on our game and the way [Gallant] wants us to play." - Panthers defenseman Keith Yandle

Need to knowOkposo's goal was his first ever scored at KeyBank Center. ��������� The Sabres went 2-for-4 on the power play and have eight power-play goals this season. ��������� Sabres forward Nicolas Deslauriers left the game with a minute to play in the third period with a lower-body injury and Bylsma said he was being evaluated and may not make the trip to Winnipeg. ��������� Steven Kampfer and Shawn Thornton each played their first game of the season in place of Mike Matheson and Kyle Rau, respectively.

3. Craig Anderson rejoins Senators
Goalie was granted leave of absence after wife was diagnosed with cancer
NHL.com @NHL
Goalie Craig Anderson rejoined the Ottawa Senators on Saturday, returning from a leave of absence that was granted earlier in the week after his wife was diagnosed with cancer.
Senators general manager Pierre Dorion said Anderson's wife, Nicholle, is in the early stages of her diagnosis but she encouraged him to return.
"It's very early in the process," Dorion told the Senators website Saturday. "We don't have many tests right now, but we're there for them and right now they are in a wait period. Given that we're in a wait period and [backup goalie] Andrew Hammond's injury [Friday] night, Nicholle told Craig to [call] me... It was determined that because they were in a wait period and were going to drive to Ottawa together as a family today, that it would be all right for Craig to come and rejoin his team"
Anderson (4-1-0, 2.94 goals-against average, .903 save percentage) also took a leave of absence during the preseason.
"He and his wife are dealing with a tremendous issue right now, and for him to be around his teammates, his presence, he's going to be embraced by his teammates and it's only going to help us grow as a family and a hockey family," Dorion said. 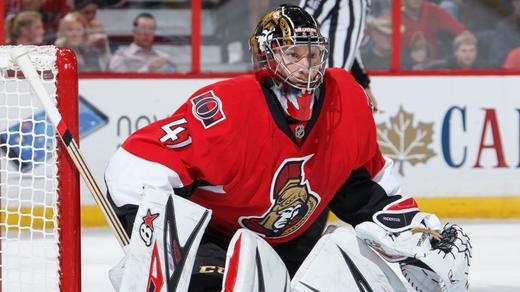 Hammond sustained a lower-body injury in the first period of a 5-2 loss at the Calgary Flames on Friday. He was replaced by Chris Driedger to start the second period. Driedger allowed four goals on 15 shots.
Dorion said Hammond will be placed on injured reserve and miss at least a week.
Ottawa recalled Matthew O'Connor from Binghamton of the American Hockey League on Saturday. O'Connor has one NHL start (last season) and Driedger has none in three NHL appearances.
Dorion said O'Connor and Driedger will remain with the Seantors because it's unclear how long Anderson will be with them.
The Senators play at the Edmonton Oilers on Sunday (9 p.m. ET; RDSI, TSN5, SNOL, NHL.TV).
2. Jaromir Jagr continues to amaze
Panthers teammates
44-year-old will move into seventh on NHL games-played list when Florida plays at Toronto on Thursday
by David Alter / NHL.com Correspondent
​TORONTO -- Florida Panthers forward Jaromir Jagr will reach another milestone on Thursday. Jagr, 44, will move into sole possession of seventh in NHL games played with 1,636, when he takes the ice against the Toronto Maple Leafs.
"It's amazing what he can do" Panthers coach Gerard Gallant said. "It's a credit to him, he works out hard and that's why he's still playing in the league. He believes he has to work every day and that's what he does and that's why he's still doing it."
Jagr will pass Hockey Hall of Fame defenseman Scott Stevens. Jagr matched Stevens' total of 1,635 games on Tuesday in a 3-2 loss at the Pittsburgh Penguins.
Jagr's teammates continue to be in awe of his ability to play at a high level. He scored his 750th NHL goal on Oct. 21, becoming the third player in League history to reach that mark. 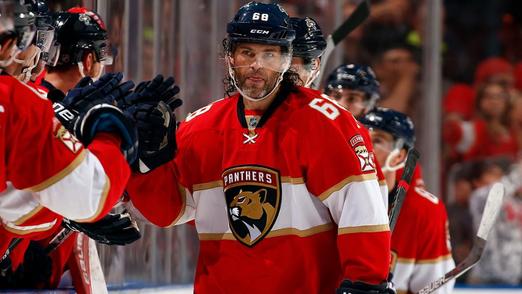 ​He's had an impact on newcomer Jonathan Marchessault, who has three goals and five assists and has been playing on a line with Jagr and forward Aleksander Barkov.
"He's inspiring the way he works on and off the ice," Marchessault said. "It's fun to be able to be with a guy like that."
While the NHL continues to get younger and faster, Jagr continues to defy the odds with his ability to contribute.
"As a teammate and a fan of the game, it's amazing, it's fun to watch on a daily basis and receive his passes," 20-year-old defenseman Aaron Ekblad said. "He's a living legend in the game, and it's truly special to play with him every night."
Jagr is four games away from matching Dave Andreychuk, who's sixth with 1,639 games played. Fourth-place Mark Recchi played in 1,652, a mark Jagr could surpass before Christmas.
"I think a lot of the guys feed off his work ethic," goaltender Roberto Luongo said. "Not a lot of guys I've seen in my career do the things he's done. It's amazing to see a guy that age have that kind of dedication to the game."
1. Hampus Lindholm signs contract
with Ducks
Restricted free agent defenseman gets six years
NHL.com @NHL

Restricted free agent defenseman Hampus Lindholm signed a six-year contract with the Anaheim Ducks on Thursday that runs through the 2021-22 season.
Financial terms were not released but TSN reported it has an average annual value of $5.25 million.
Lindholm, 22, had 10 goals and 18 assists in 80 games last season, his third with Anaheim.
Lindholm was named to Team Sweden for the World Cup of Hockey 2016 as a replacement for Detroit Red Wings defenseman Niklas Kronwall, but did not play during the tournament.
The No. 6 pick in the 2012 NHL Draft, Lindholm has 23 goals and 92 points in 236 games since making his NHL debut with the Ducks in 2013.
​ 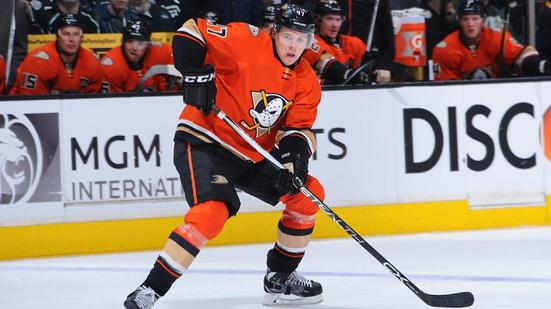